Read on to learn more about…

Short operating cycles continue to be one of the chronic complaints associated with modern hydronic heat sources. State-of-the-art mod/con boilers with 5:1, 8:1, or even 10:1 ratios between their maximum firing rate and minimum stable firing rate canʼt always match the heating load imposed by a single small zone, such as a towel warmer radiator in the master bathroom, on a mild day. This is where the additional thermal mass provided by a buffer tank provides the “thermal elasticity” needed between heat supply and heat demand.

Over the last couple of decades, the North American hydronics industry has been learning the importance of buffer tanks as low thermal mass boilers, and water-to-water heat pumps have been increasingly been combined with highly zoned distribution systems.

As biomass fueled boilers make their mark on the industry, one of the principles that most system designers now agree on is that a properly sized buffer tank is essential to good performance for wood gasification boilers, as well as boilers fueled by pellets and wood chips.

In North America, one of the most common arrangements for a buffer tank is to install it between the heat source and distribution system as shown in figure 1. 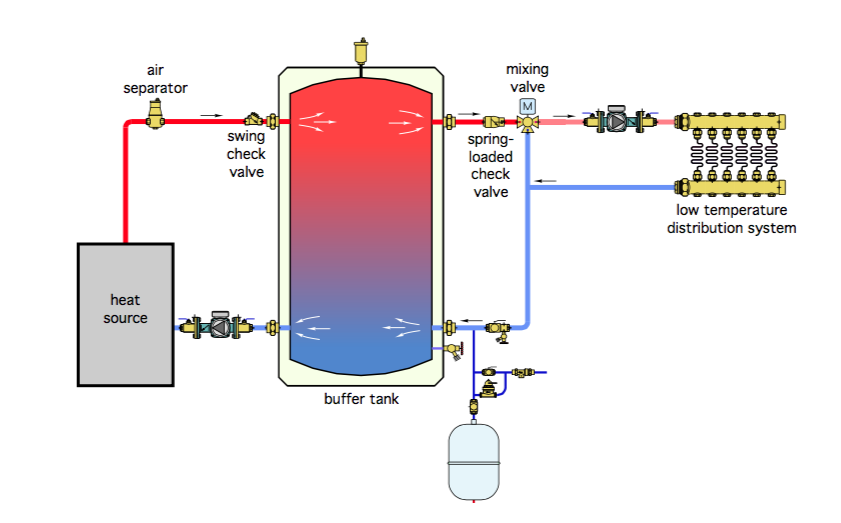 Notice that a swing check is shown on the pipe leading into the tank from the heat source. Itʼs there to stop reverse thermosiphoning during times when the tank contains heated water, but the heat source is not operating. The upper right connection leading from the tank to the distribution system also contains a check valve. I suggest using a spring-loaded check valve in this location to stop potential forward thermosiphoning when the distribution system is not operating. A swing check does not have sufficient forward opening resistance to stop such thermosiphoning, but most spring loaded check valves have a forward “cracking” pressure of about 0.5 psi, which is generally enough to stop this unwanted flow.

Cooler water returning from the distribution system tends to remain in the lower portion of the tank, and “slide” across to the bottom left sidewall connection back to the heat source. These effects are both desirable because they help maintain temperature stratification in the tank. Multiple Benefits: Besides providing thermal storage that allows reasonably long operating cycles of the heat source, a buffer tank piped as shown in figure 1 also provide excellent hydraulic separation between the heat source circuit and load circuit. This happens because the internal flow velocities within the tank are very low compared to the flow velocities in the piping connections to and from the tank. There is almost zero head loss across the tank, or from the top to the bottom of the tank, due to these low velocities.

The low flow velocities also allow dirt particles, that may be present in the flow returning from the distribution system, to drop to the bottom of the tank. To only problem is that most buffer tanks are not designed to efficiently flush dirt that settles to the bottom of the tank out of the tank . Dirt that happens to settle near the drain valve may get entrained with flow out the lower tank drain valve, but the low local flow velocities in other lower areas of the tank cannot effectively entrain dirt, and thus are unable to carry it to the drain connection. Thus, most buffer tanks can eventually separate and acculate dirt, but are not good at flushing that dirt to a drain. This is where a modern dirt separator, which can generate sufficient internal flow velocity during a flush to entrain accumulated dirt, is the preferred choice.

The heat stored in a buffer tank can also be used for domestic water heating, or preheating, using either an internal coil heat exchanger suspended in the upper portion of the tank, or the “on-demand” assembly shown in figure 3. After looking over many schematics from European sources, especially those associated with biomass boilers, Iʼve noticed a trend that places the buffer in a different arrangement compared to the heat source and load. This alternate arrangement is shown in figure 4. In this “2-pipe” buffer tank scenario, the flow velocity entering the buffer tank is lower than with the “4-pipe” arrangement shown in figures 1 through 3. Lower entering flow velocities helps preserve temperature stratification, and thus maintain the warmest water at the top of the tank, ready for transfer to the load.

Yet another benefit is that the piping shown in figure 4 eliminates two of the principal sidewall connections on the buffer tank. This should also reduce the cost of the tank, with all other specifications being the same.

Still, in my opinion, itʼs better to work with buffer tanks that have more connections than those absolutely necessary for a given application. The extra connections can always be plugged off if not needed. Or they can be used to attached devices such as sensor wells, thermometers, sight gauge connections, or piping connections that better match incoming flows to the likely temperature stratification of the tank. Extra connections might also be used to accommodate the on-demand DHW assembly shown in figure 3.

Keep It Close: The degree of hydraulic separation between the distribution circulator and heat source circulator provided by the system in figure 4 depends on the length and size of piping between the tees where the distribution subsystem connects, and the connections to the tank. This piping should be short and generously sized to minimize head loss. Thus the callout for “short / fat” headers in figure 4.

If the buffer tanks have the four principal piping connections shown in Figures 1 through 3, it is possible join two or three of them together in a “close coupled” arrangement as shown in Figure 6. This piping allows the two buffer tanks to maintain flow dynamics very similar to the single “2-pipe” buffer tank shown in figures 4 and 5. To maintain good hydraulic separation across the tank array, the couplings between the tanks should create minimal head loss. A short flexible connector works well, and compensates for any slight misalignments of the tank connections due to manufacturing tolerances, or a less than perfectly flat floor slab under the tanks.

Have it Your Way: Either the traditional buffer tank piping shown in Figure 1 through 3, or the alternate method shown in Figure 4 and 5 can work. Both have been used on many successful installations. Itʼs likely to come down to what tanks are available, how the piping connections on the tank are sized and located, and how those tanks would be optimally located in relationship to the other components and subsystems.

For a more detailed look at these tank configurations and the way they interact with system controls, register for the Heatspring course “Hydronic Based Biomass Heating Systems,” which begins in September. John Siegenthaler, P.E., is a mechanical engineer and graduate of Rensselaer Polytechnic Institute, a licensed professional engineer, and Professor Emeritus of Engineering Technology at Mohawk Valley Community College. “Siggy” has over 32 years of experience in designing modern hydronic heating systems. He is a hall-of-fame member of the Radiant Professionals Alliance and a presenter at national and international conference on hydronic and radiant heating. John is principal of Appropriate Designs – a consulting engineering firm in Holland Patent, NY. The 3rd edition of his textbook – Modern Hydronic Heating – was released in January 2011. John currently writes about hydronic heating and solar thermal system design for several trade publications.